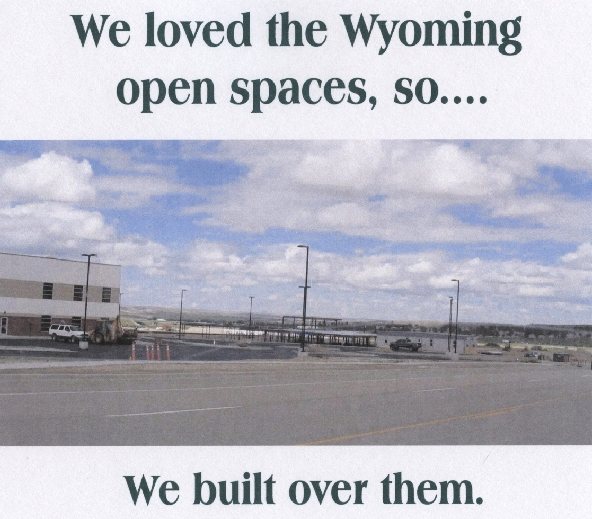 For more information on Wyoming travel and living, visit this link:    http://www.ultimatewyoming.com

This site is dedicated to showing people what nature has to offer and what will be
destroyed or permanently changed if no one wakes up to the contradictions in
behavior and claimed beliefs. I should add that I am fully cognizant of
the right of people to change nature and behave as they chose. Humans are the top
of every natural chain out there--food, habitat, etc. What I am trying to instill
is what is being lost and to get people to be honest. Tell your grandchildren there
may be no open spaces in Wyoming or elsewhere because you had enough money to buy
land, pave it over and build an 8000 square foot second home. Tell them your dream
for Wyoming was to be just like Colorado and then take down those ridiculous signs
at the border that says "Wyoming. Like no place else on earth". BE HONEST.

And stop blaming the oil companies for the environmental damage. The oil companies
only exist because people want energy. They are fully regulated and have to reclaim
areas, as do mines. Ranchers and realtors can do anything they want to the
environment--cut ranches up into 20 and 40 acre lots, put in roads, and alter 10's
of thousands of acres of habitat so they can make the millions the oil companies
are criticized for.   A realtor selling off thousands of acres and turning said area
into a subdivision does more environmental damage than energy exploration. All
in the name of profit. Let's look at ALL the contributors, not just the commonly
attacked ones, and let's look closely at who does the most harm and who does the
least harm.

Page through the various sections of this site and feel free to e-mail and let me
know if you share my concerns or you just want to pave it all over and build a
coffee shop and movie theater. Look at what will change and what is being lost.