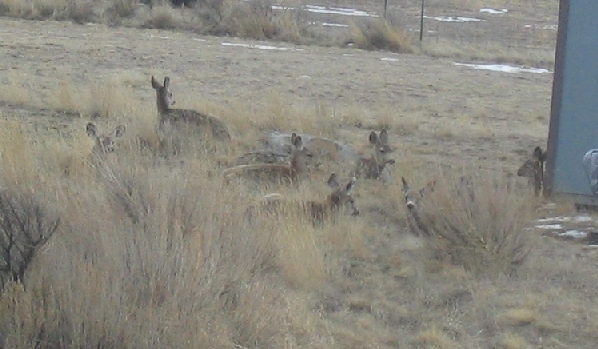 Becoming a nature sanctuary was not a stated goal of mine.  It never entered my thoughts. I was not one to disturb nature much— I liked walking, rather than driving, through the landscape. I didn't use many chemicals many of them caused reactions in me that I found uncomfortable.  The sagebrush on my property was one of my favorite things, so I did no mowing and had no horses to tramp it down.  Prairie grass made a satisfactory lawn.  It requires little water, mowing, and no fertilizer.  For while I put on dandelion killer on the areas on the south side of the house, but then I couldn't walk there for a week and we had to keep my dogs off the area. Switching to natural pre-emergent worked for years, but this was a corn-based product and the birds discovered it.  They apparently consider it a tasty treat.  Now I just use an old fashioned digger to remove the dandelions manually while getting some good exercise and getting outdoors.  The weeds that make up much of my mowed around the house are not as pretty as a manicured lawn, but they take no water and hold the soil in place. Mowing the grass from around my house has always been necessary to prevent fires and snakes from coming up too close.  I'm not bothered by snakes— I have had as many as 13 for pets.  However, I do want to know where the snake is in relation to my feet and legs.  Cutting the grass allows me to see the snake before I step too close.  I have always relocated snakes whenever possible.  Since I own a somewhat small dog, I have to keep a close eye out for the snakes which have chosen to live here, making sure they are not large enough to harm the dog.  Over the past 23 years, our yard has had three windbreaks put in, all watered using drip systems or leaky pipe systems. This allowed for birds and deer to move into the area. This was not my original Intent.  The largest windbreak protects the garden area, reducing the amount of water necessary for gardening. The second windbreak slows the wind before it hits our house.  And the third one provided shelter for the garden from easterly winds. The trees we planted are Russian olive trees, caragana, elm, poplar and ash. The Russian Olive trees are now frowned on by the state because they thrive here and choke out native species. This may be true, but the drought undoubtedly added to the cottonwoods demise, which is the species most threatened by the Russian Olive trees.  Deer leave the Russian olive trees alone when they are larger, but they love to "spar" with the caraganas, and have destroyed several of them. In the past, we had deer tear the branches off a cottonwood tree that was 10 feet tall. They tore off branches to six feet off the ground and killed the tree. Fencing of smaller trees is required if you want them to survive.

In all fairness, I should note that I have found that deer, if living in an area with natural food and human provided fare, seemed to first eat the natural food, then the landscaping.

Before there were deer, protecting the garden and trees meant putting poultry mesh around trees to protect them from rabbits and chasing said rabbits out of the garden. After deer, things changed significantly. We put an electric fence around the trees and garden.  Forget what you've been told about electric fences and critters. The critters have not read these books. The only critter actually stopped by the fence was an old dog I had. She took two tries and stayed away from the fence. The first year some of the deer would step back from the fence and go elsewhere. It didn't take long, however, before they were crawling under the bottom wire, while making full contact with the wire.  Next came snow fence with the electric fence above It. This gave us an eight foot fence. Two years ago, the deer discovered they could clear an eight foot fence, again and again.  So we moved up to snow fence plus 5 feet of remesh, the kind used to reinforce concrete. To date, no deer have jumped the nine feet. Also, the nine foot fence only surrounds the garden. The windbreaks have no fence. This has resulted in the deer motel. I did leave a section of fence on the south end of the windbreak and the deer congregate around that area.  Plus, they will go inside the garden during the winter.  Last summer I had to put up fiberglass all around the bottom of the garden to keep out the many rabbits in the yard (rabbit populations go in cycles and this is an up cycle). The fiberglass gives the deer more protection from the constant wind out here, as does the farthest back windbreak.

An unexpected result of the fiberglass was deer sleeping in the garden and not seeing us walk up until we were  nearly to the gate. This results in the deer panicking and crashing into the fence.  We have had to be more cautious when going out by the garden in winter.  Last year, I ended up closing the gate part way through the winter due to this problem. I guess this year I am more sympathetic because it has been so windy.

The deer did not live in this area 20 years ago. I did not move into their territory, but rather they into mine. I had photographed the deer about four miles north of my land, living among the oil derricks. While drilling may cause the deer to relocate while the active drilling is going on, once pumpjacks are in place, the deer will return.  Later, as more and more people moved into the area where our house is, the deer moved in also.

Our 5 acres are also home to rabbits, birds, and ground squirrels.  The rabbits are  hunted-helps control their population.  The eagles, hawks, and owls also help control the rabbit and gopher populations.  As previously mentioned, bullsnakes and rattlesnakes also keep rodent populations in check.

While it is tempting to write a Walt Disney type warm and fuzzy page, that version of wildlife left out some important truths about living with wildlife.

Truth one:  All wildlife have a need to eliminate waste. Your yard is where that will occur.  With 30 deer or more here through much of the winter, I spend each spring raking paths free of deer droppings so we can walk around the yard. Rabbits do the same, but smaller quantity. Thus far, the birds have posed little problem-they don't even seem to mess up our cars.

Truth two:  Rabbits, skunks, birds-they are all wild animals.  Deer can decide quickly that you are an interloper and kick -hard.  Antlers are another threat. I do not feed the deer, nor do I name them.  These are not domestic animals and I respect that.

Truth 3:  All things die eventually.  In the case of deer, that may be while crossing your fence in a January blizzard.  It may be in the "back forty". Or maybe in the windbreak.  Since I live outside of town, there is no agency to remove the dead animal.  My choices were to take it to the landfill (that costs money), dump it on the prairie (which requires notifying Game and Fish so you aren't cited for poaching when someone sees you driving around out of season with a dead animal), or drag it to the back of my yard.  I chose the third option.  I'm pretty much one of those "Circle of Life" individuals. However, some people might find the whole death scene more traumatic.

It has been interesting learning about wildlife habits and activities while trying to adapt to sharing the area with critters.  There have been several articles written about how to keep wildlife out of your yards, but where I live, the only practical solution was to accept that the deer and rabbits were not leaving and to work around them.  It's a bit of a mess at times, but they are fascinating to watch.  As raptors come in closer and closer, plus songbirds and ground squirrels, it's always interesting to take a quick look out a window and see what activity is going on in the yard.

More on this later.