It has been an interesting spring into summer. First we had a really wet spring then summer hit with a vengeance! Ninety degree temperatures and wind on some days. The grass went from green and lush to dead and dry in a period of two or three days. This significantly increased fire danger.

We are also battling a grasshopper invasion. Our yard is just covered. I put a video on youtube (http://www.youtube.com/watch?v=73se1bjYN_s) showing them jumping as I walk. I have been using organic and nonorganic pesticides and added three ducks to help control the outbreak. The ducks are proving a bit stubborn, not wanting to leave their pen and when they do, they want to go where it's hot in the sun and not in the shade where the landscape pond is. They are eating the hoppers, though. As the prairie dries out, the hoppers move into the yards looking for food. The seagulls have arrived, eating both the hoppers and the morman crickets that are now emerging. Generally, I don't like seagulls, but this year I'm for anything that eats hopper and doesn't damage the trees and garden.

We have been helping a friend move her things out to the ranch area so she can have her stuff on her land and not an hour and a half away in storage. It's difficult to get out in the winter and we helped her build a shed for storage. Building in a windy area requires special handling. We built the shed up off the ground like our Hut and then you have to foam in all the cracks to keep out the dust. Dust in a storage shed has a unique smell and is very hard to wash off your hands. Plus, you have to use construction adhesive and nails to keep the building together in the wind. The roofing is always a challenge--this shed ended up with tires on the top to hold the rolled roofing down. If you happen to shingle when it's hot, the shingles glue down pretty well. We were fortunate to be able to shingle in a warm period and the shingles on the Hut have stayed on pretty well.
There was a tremendous amount of wind earlier this month at the ranch--enough to slide our outhouse even though it was tied down. It was moved over about 6 inches. Had it not been tied down, it would have tipped over. Our friend's swing (porch glider) was tipped over even though it was tied down and had concrete blocks holding it down. Most of the time the wind precedes a storm front. Speaking of storms, we also had hail on the fourth of July with a high temperature of 57 degrees. My garden got kind of shredded but has come out of it pretty well. We are keeping our fingers crossed that no more hail occurs.

Last trip to the Basin we were coming back to the ranch and saw a badge dive into a culvert. Of course I jumped out of the truck to see if I could get a picture. I walked to the opposite end of the culvert and waited. As I adjusted the camera, the badger came running to the end of the culvert, took one look at me and flipped around back into the culvert. All of this occurred so fast there was no chance to take a photo. That's the closest I have been to a badger--maybe 10 feet away! We tried to get him to come out by banging on the culvert (which should probably not be tried by the casual wildlife enthusiast since badgers have a bad temper sometimes) but he wouldn't budge.

I watched one evening as one of the deer came up to the landscaping pond at dusk and got a drink. It was so cool--like something out of the books we read when we were kids. Sometimes I realize just how much I enjoy my life on the prairie.

We have a couple of fawns that camp out in our yard. For a while they looked pretty odd with their fur shedding--there was a Y-looking pattern left on both of them. Now, they are in full summer coat. One was limping the other day. My little dog growls at them if you hold her up to the window when they are in the side yard. She barks at them from her yard, but they tend to not be afraid of her. Depends on how jumpy they have gotten.

We did see sage grouse and baby sage grouse. Quite a few of them. No foxes right now though. There is an industrial wind electrical turbine plant going in off to the east which may be driving out the wildlife. People complain about oil drilling driving out wildlife, but turbines are equally problematic. Plus, I have seen wildlife in oil fields but not under turbines. I haven't even found pictures of wildlife under turbines. So the grouse and foxes may be losing hundreds of acres of habitat soon. 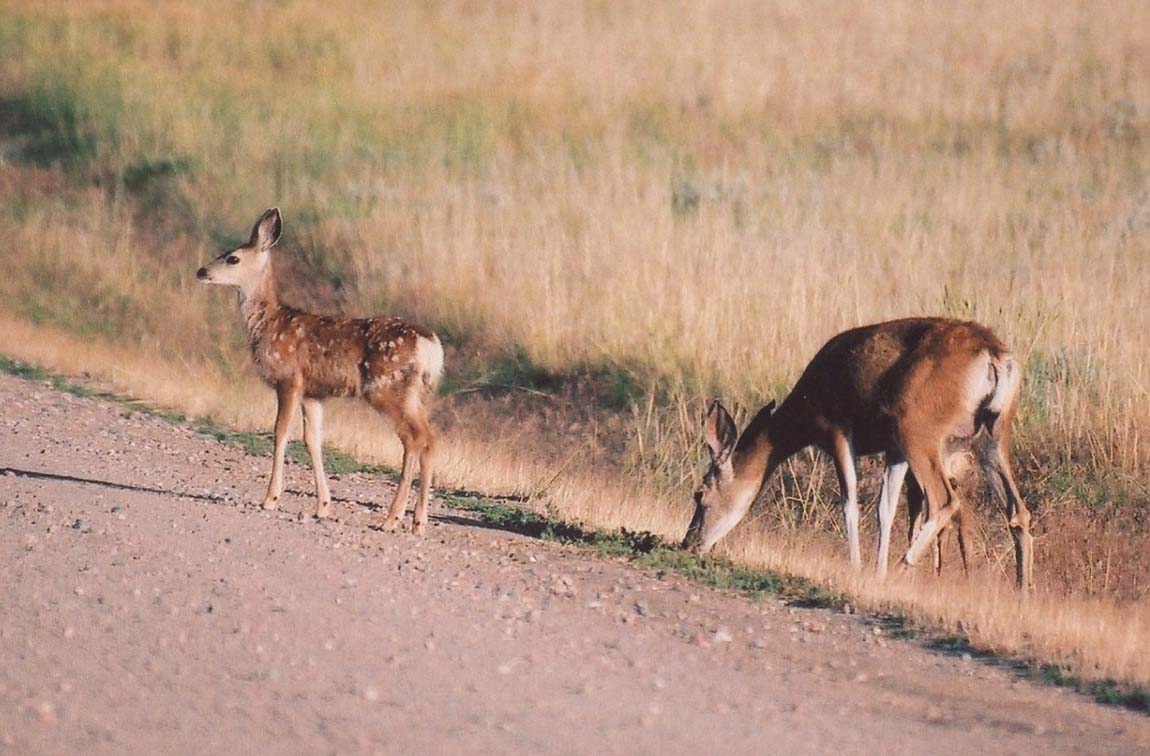 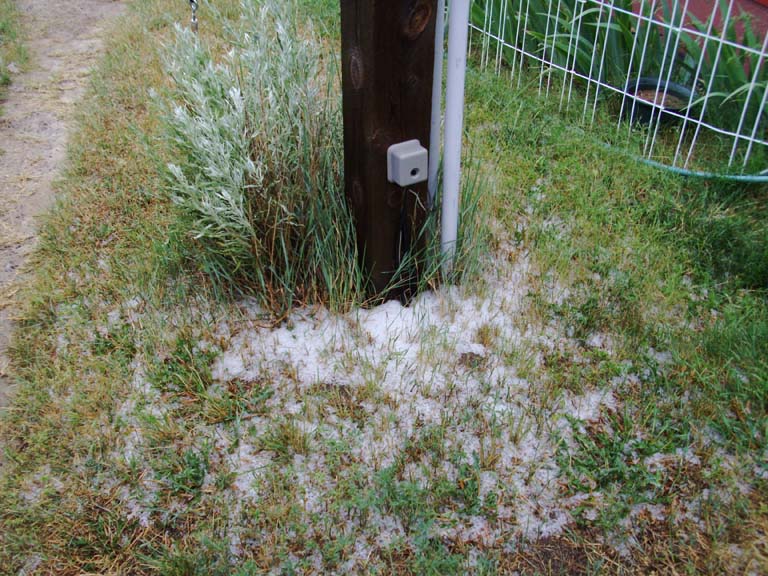 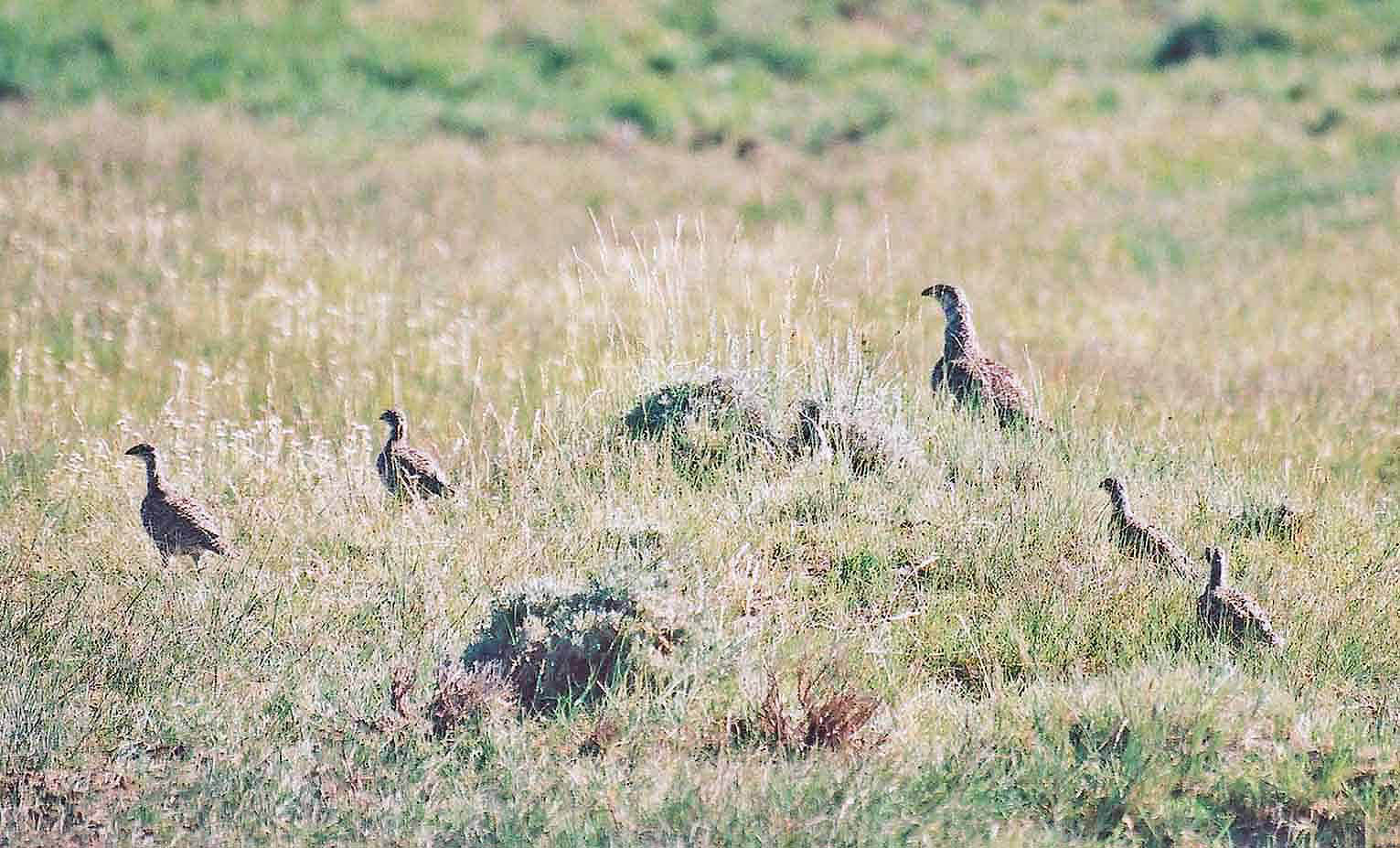 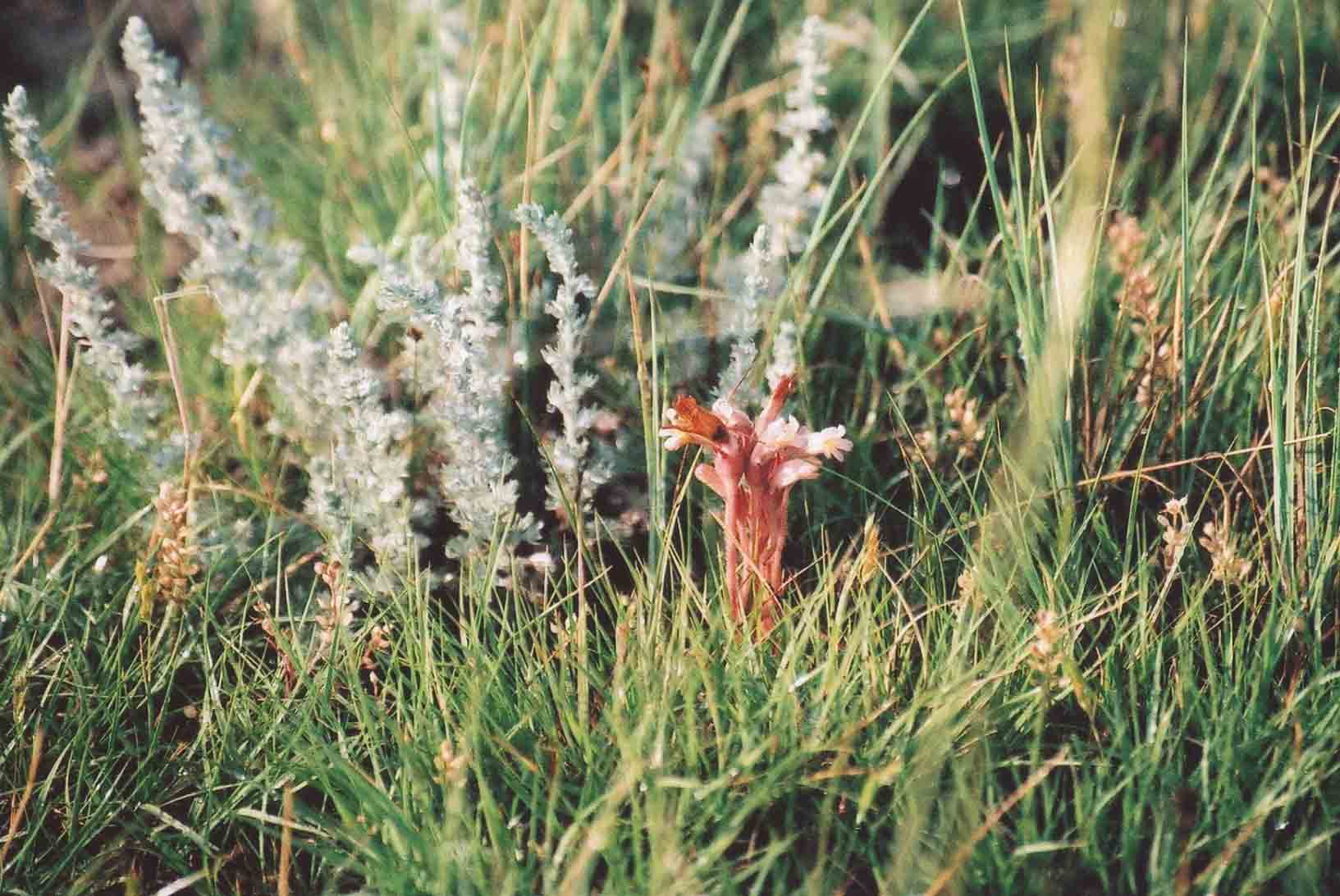 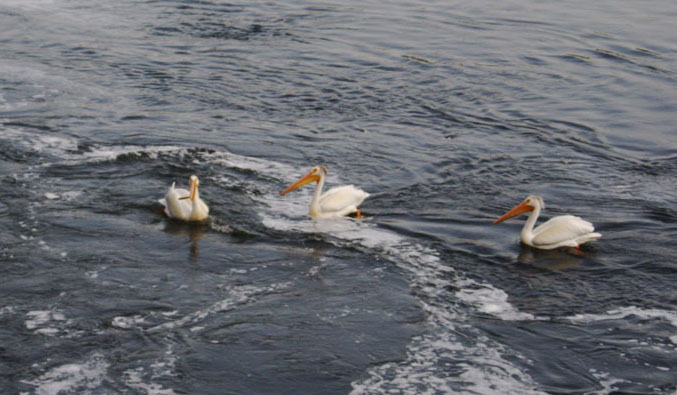 Doe and fawn (one of twins) 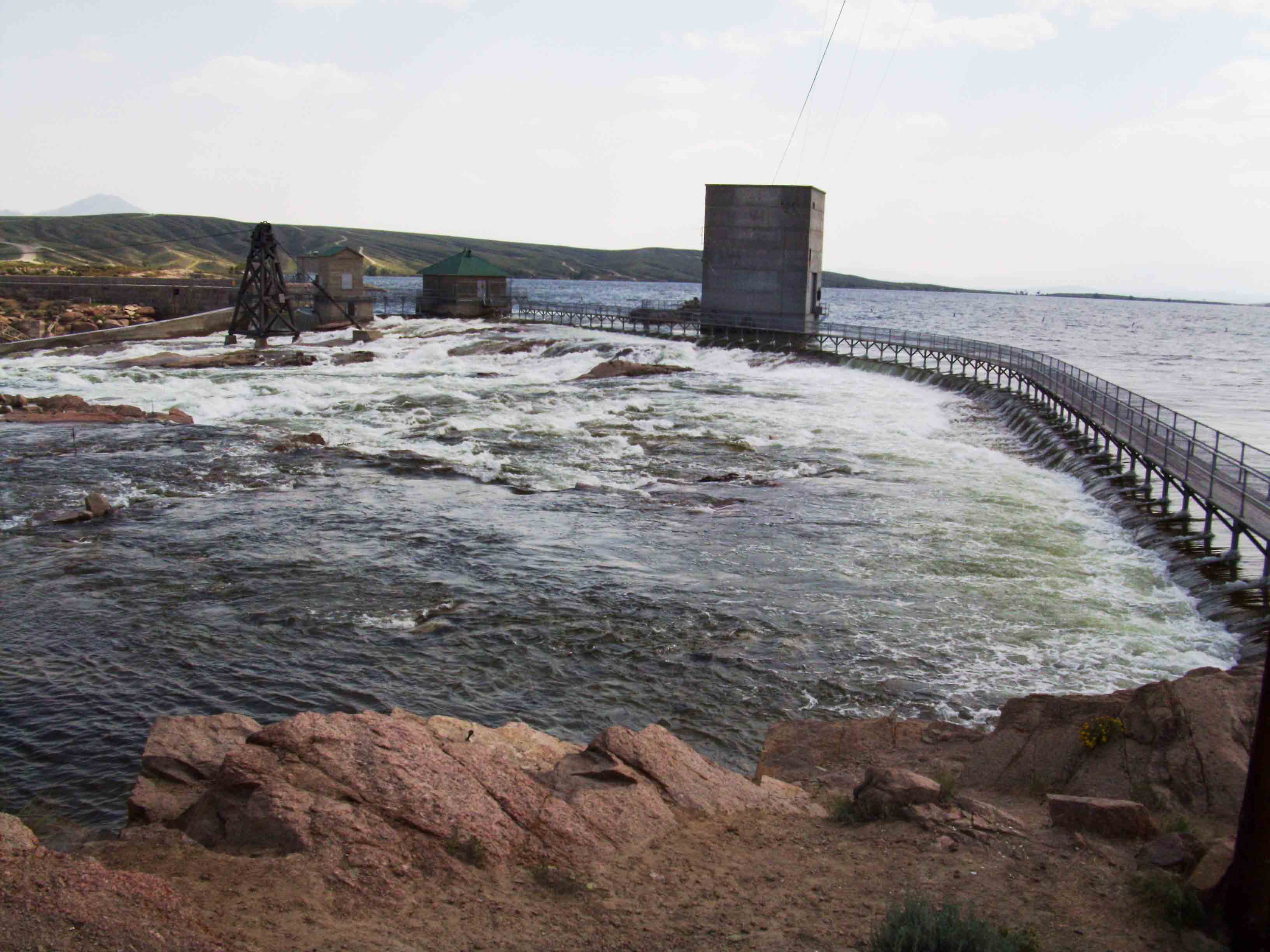 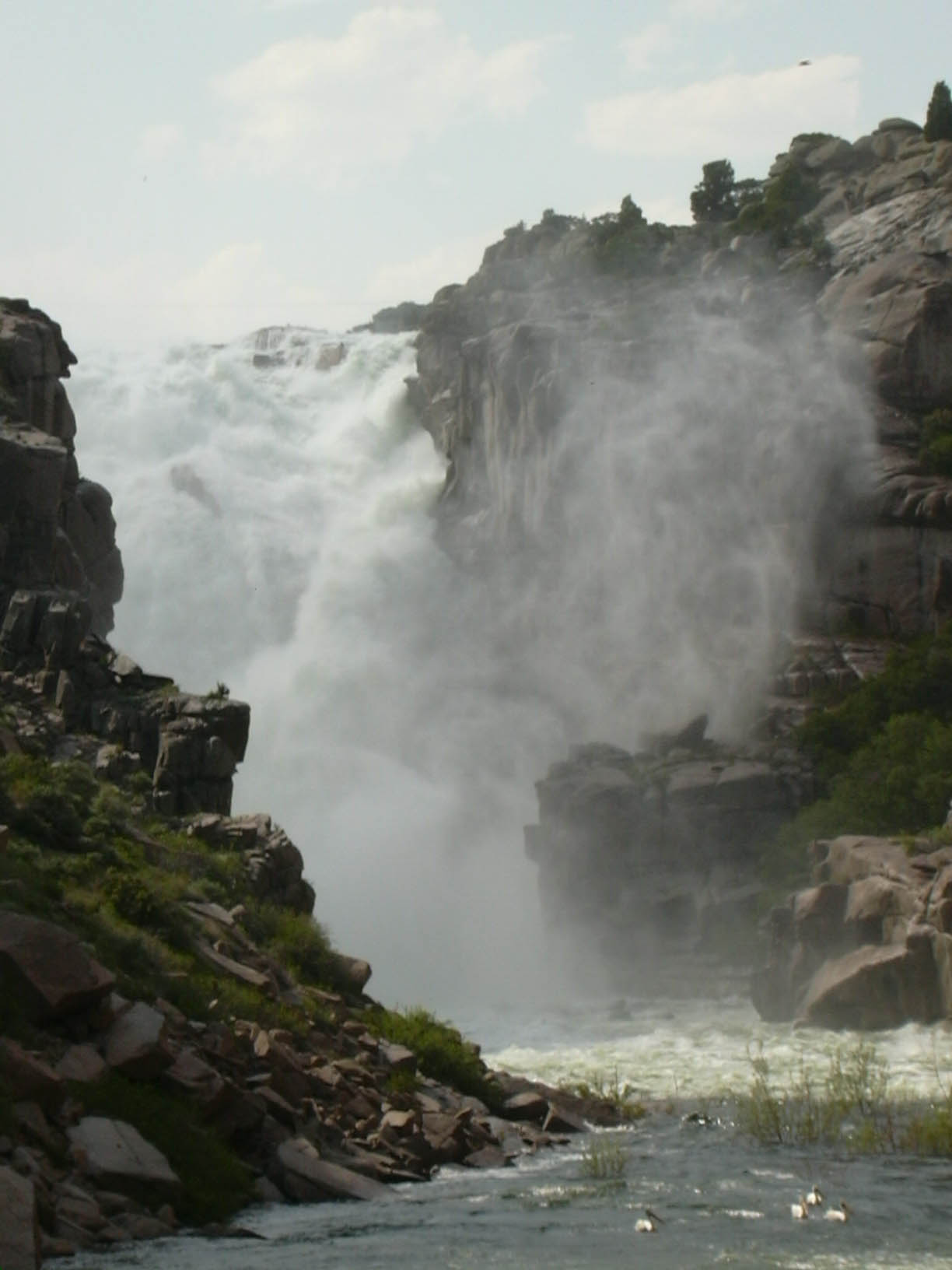 Broomrape blooming in my yard 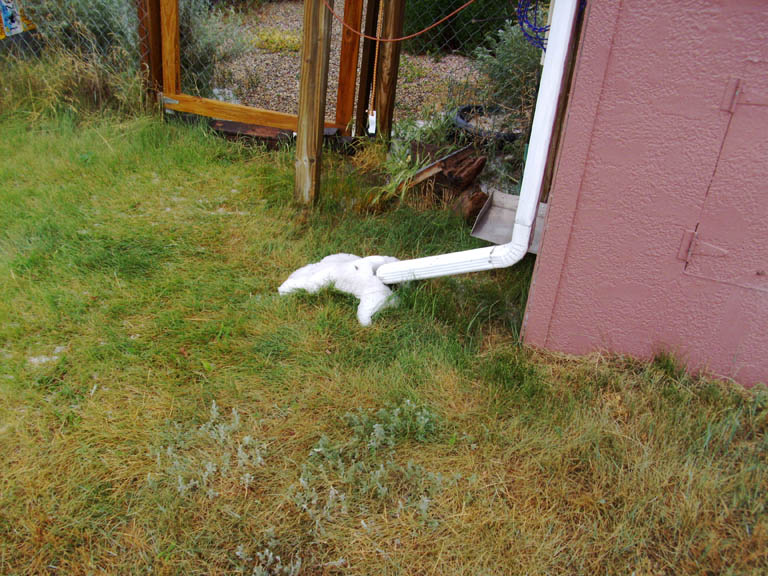 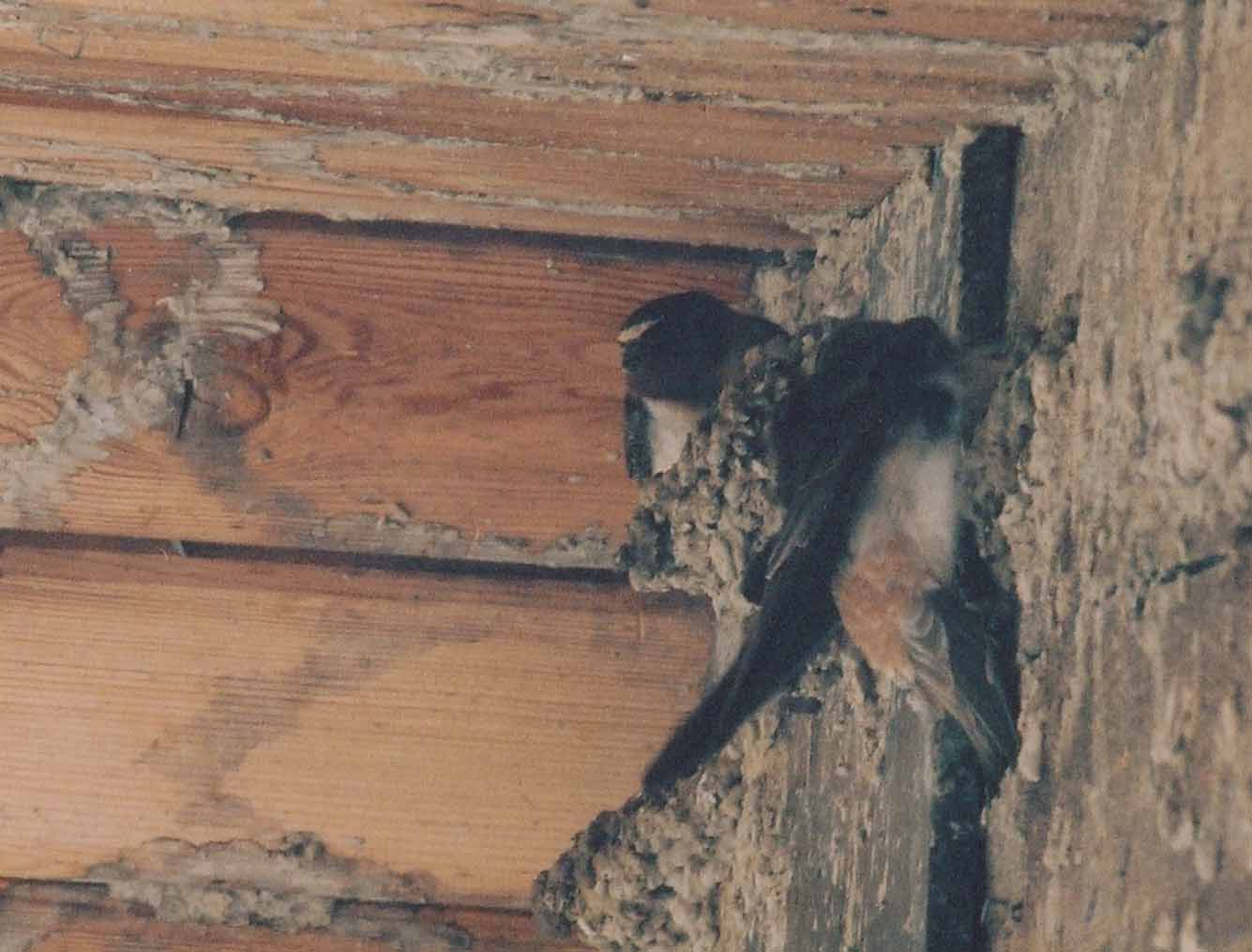 This year Pathfinder Dam had water running over the spillway.  This is the second time in 26 years I have seen this happen.  This time was more phenomenal.  The pelicans are swimming in the river below the dam.  Below are pictures of the dam from the top and from the spillway.  It resembles a waterfall--a large, beautiful water fall.  We drove out twice to take pictures, as did most of the Casper area residents!

(There should be no water visible on the left side of the walkway.) 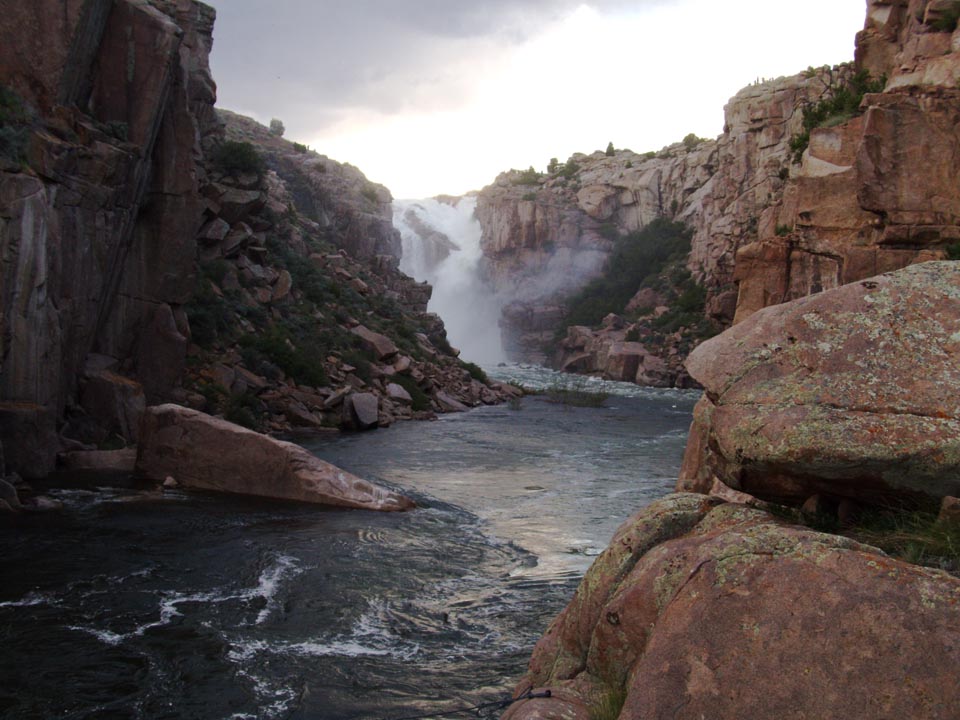 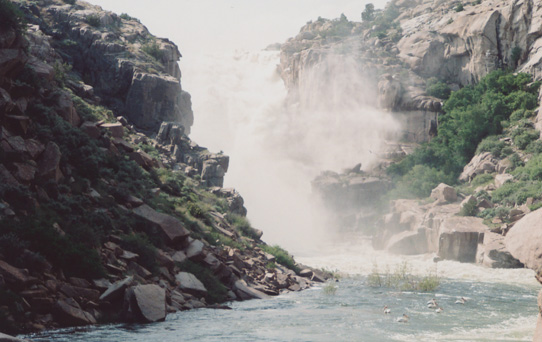