Western Hognose are quite small snakes, especially the males.  They are often mistaken for rattlesnakes.  They do bear a real resemblance to a juvenile rattlesnake.  Only experienced herpetologists (amateur or professional)  should attempt to collect or inspect a specimen.

Hognoses are unique in their reaction to predators.  First, the snake flattens out its body to try and look bigger.  If that fails, the snake will strike and hiss at the predator.  This looks and sound scary, but these snakes rarely bite as a part of the display.  If all else fails, the snake rolls over and "plays dead"--tongue hanging out and all.  The heart rate slows, a foul smelling liquid can be emitted from a gland near the tail. The snake then lays completely still.  It's an incredible display.  I have a Western hognose (wild caught) for a pet and in captivity, the snakes don't display this "play dead" reaction.  The snake will puff up and hiss, however.

There are reports that the bite of a hognose snake can cause swelling similar to that of a rattlesnake bite.  The snake is rear-fanged (fangs at the back of the mouth, not the front as one sees in most snakes) so bites often involve "chewing".  The rear fangs are used to puncture toads, a food the snakes are fond of.  Since some of the toads have toxic secretions (which the hognose has defenses against), it may be that a bite transfers this toxin to the human that is bitten.  There are photos on the internet that show what appear to be a severe reaction.  Should you find such photos, remember, these are not common and the snake presents no danger to you in the wild, as long as you LEAVE IT ALONE.

As noted above, hognose snakes eat toads, along with frogs, mice, small rodents, etc.  The upturned nose helps the snake uproot toads and other prey.  I have had three hognose snakes as "pets".  Only the current one readily took mice as food.  If you are interested in keeping a hognose snake as a pet, it is best to buy captive bred from a reputable dealer.

Hognose snakes are egg-laying snakes.  They produce up to 25 or so eggs, laying them on the ground and burying them in sand.  I am not sure whether this applies to the snakes living in less sandy areas.

Western hognose snakes are common in Wyoming.  This is not true in all states and some populations in other states are protected.

The biggest threat to hognose snakes is humans.  People often kill these snakes thinking they are rattlesnakes.  Snakes serve an important role in the environment--rodent control.  Killing the snake is trading "up" to more rats and mice--and the diseases rodents carry.  It is interesting to note that snakes rarely transmit diseases, and only then by being handled. Leaving the snake alone is the best choice.

For information on the care of captive bred hognose snakes, check out this link for some quick facts and an ebook you can purchase on caring for hognose snakes. 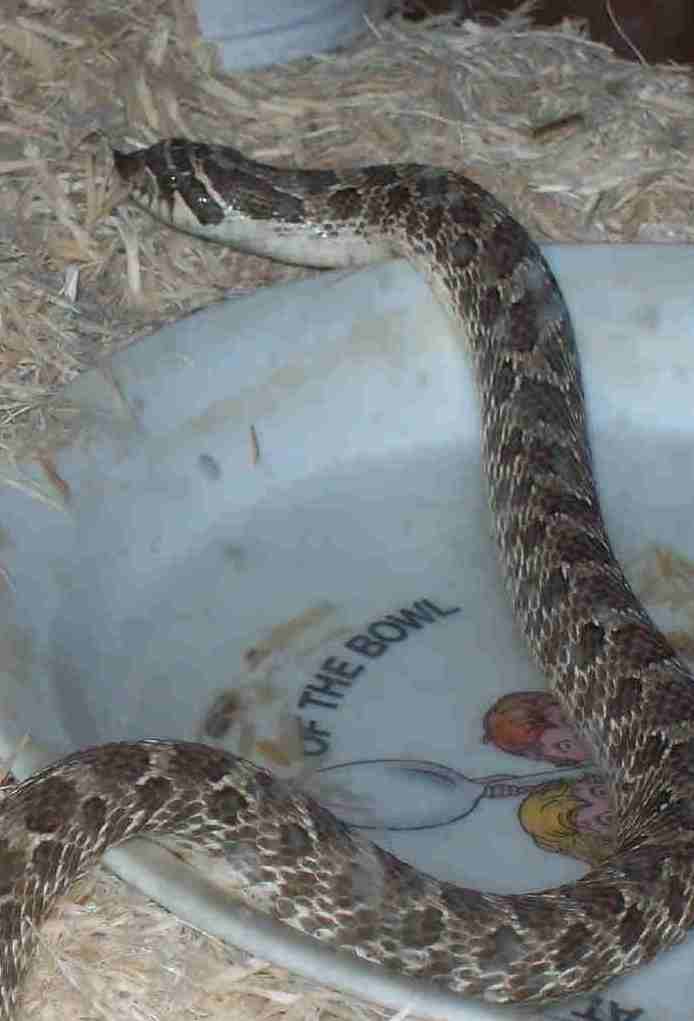 (I have no photos of these snakes in the wild.)