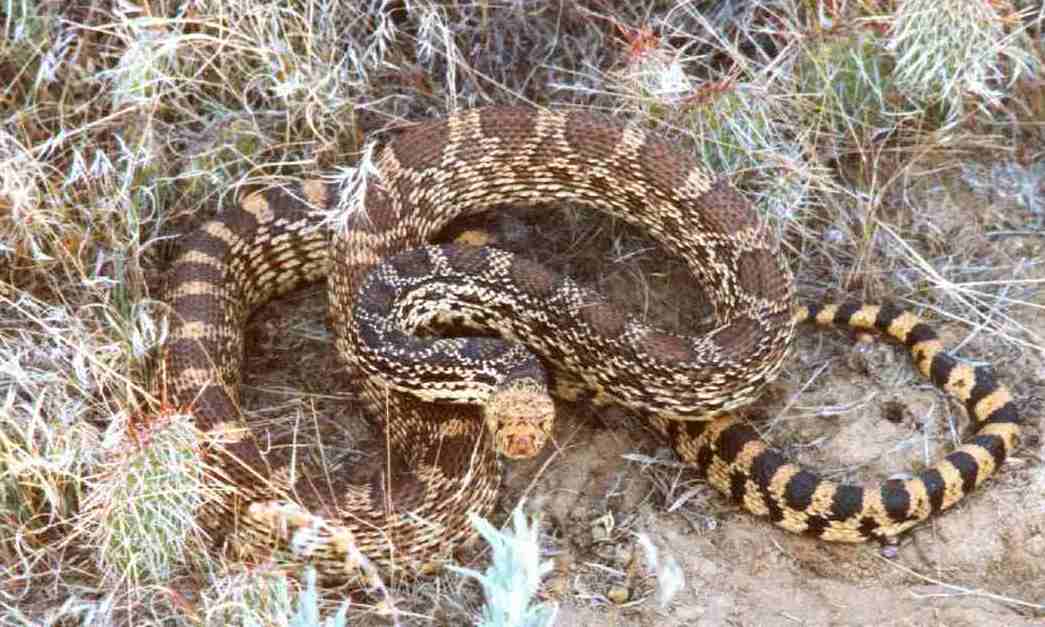 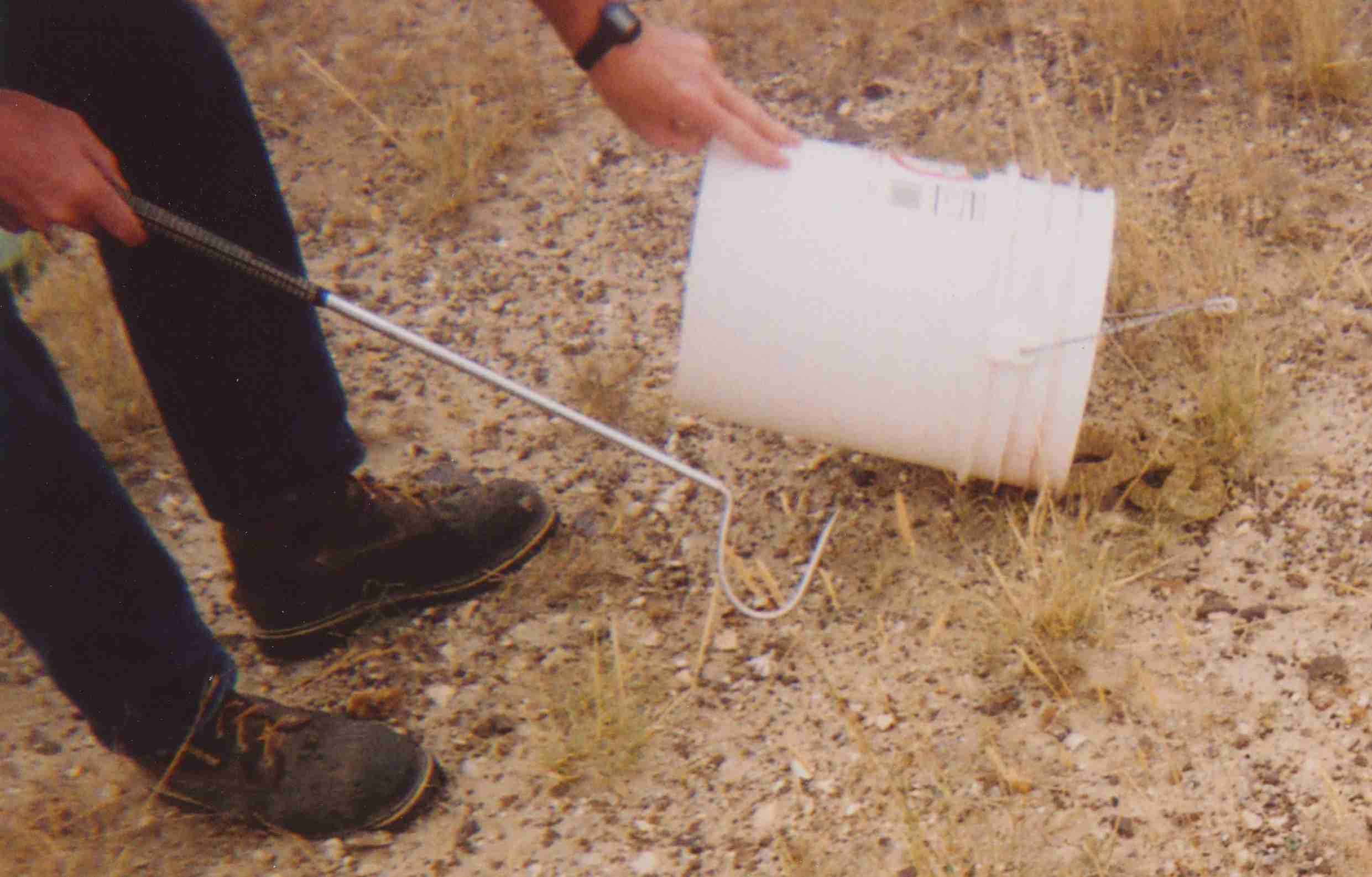 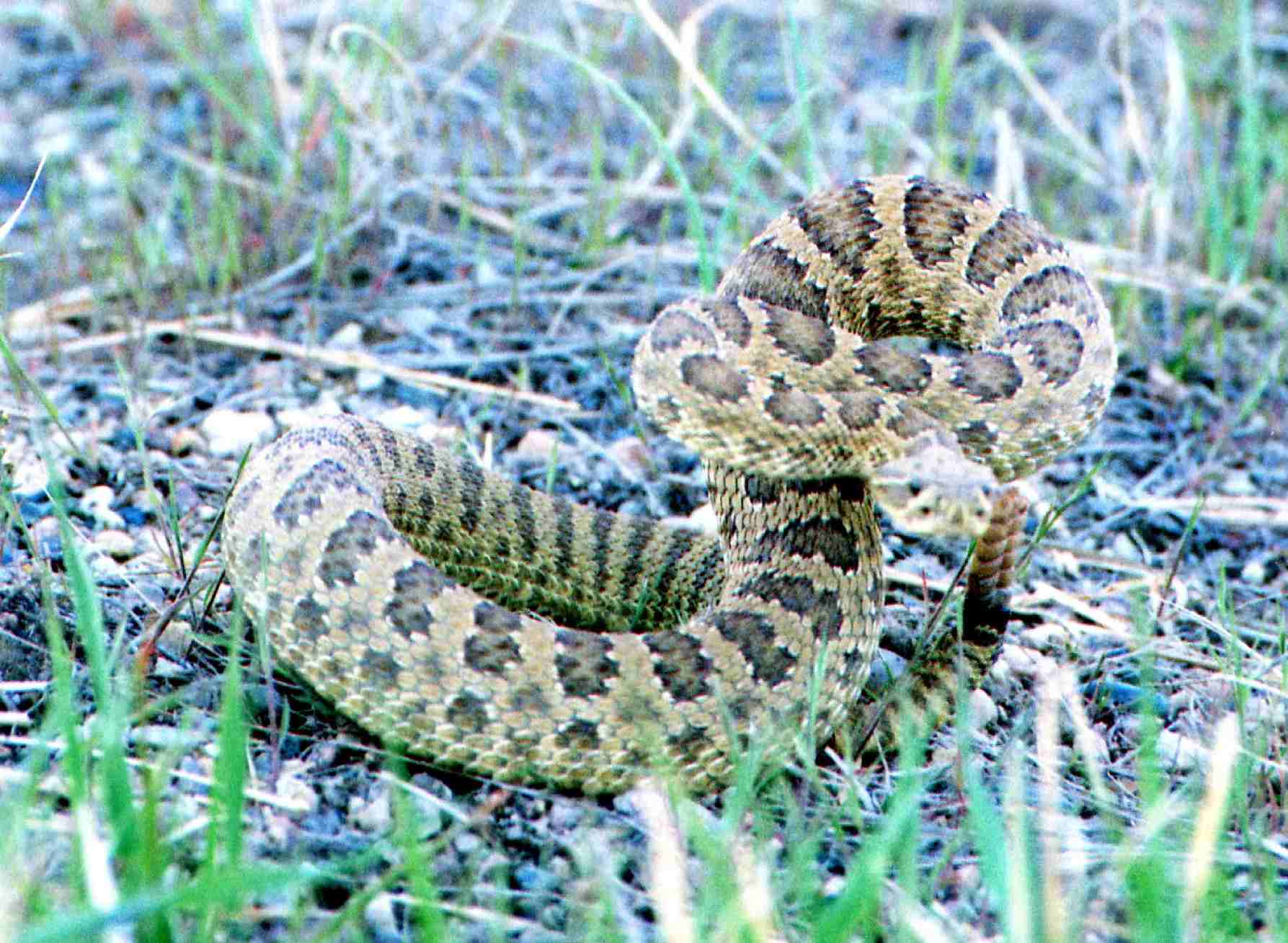 The February species of the month is the prairie rattlesnake.  This probably is not one of the more popular reptiles found in Wyoming, but it is important that people know the good that these snakes do.

Many people believe that rattlesnakes are aggressive.  This is not the case with the prairie rattlesnake, unless one is deliberately teasing the snake (alcohol often results in this type of behavior) or one puts a hand in front of the snake without realizing the snake is there.  If you live where there are rattlesnakes, wearing gloves when stacking wood, collecting rocks, clearing brush, etc, is recommended.  This lessens the chance the snake will view you as a threat or as food because the gloves help block body heat.

I can attest to the fact that rattlesnakes are not as scary as people think.  Several years back, my husband and I were out walking our four dogs around our 5 acres.  I took a step and heard a rattle.  I froze in place and looked down.  There was a small rattlesnake between my feet.  I was holding one small dog and my husband grabbed the other small dog.  We ordered the two large dogs to back away.  I then jumped away from the snake.  We did have to kill the snake because we were not sure we could get the dogs to stay away from the snake long enough for it to crawl away.  The only bite that occurred was from my husband grabbing the Yorkie, who objected to not being allowed to kill the snake!

In most cases, we have been able to relocate the rattle snakes found in populated areas, although with the increase in development, that is becoming more difficult. The snakes have to be moved far enough not to come back to the development but not moved to an entirely different area.  For relocating the snakes, we use a hook to get the snake into a five gallon bucket, put a lid on and drive the snake to a suitable site for release.  The hook is vital to this procedure.  Attempting to "catch" a rattlesnake bare-handed is a great way to get a trip to your local ER.

Rattlesnakes have territories.  There are dens they go to every fall, and if development occurs in the area, the snakes will continue to try and return to their dens.  This is quite disturbing to many people who move into an area and discover they are on the "migration" path of the rattlesnakes.  The snakes leave their dens in the spring and return in the fall.  In addition to disturbing the new inhabitants, this behavior (denning) also makes the snakes vulnerable to humans, as the snakes are in the same small area twice a year.

Rattlesnakes are quite beneficial to humans.  They eat rodents in the area.  This is especially important now that haunta virus has come into the picture.  Anything that reduces the number of mice and rats should be appreciated by we humans.  Which brings us to the statement that unless the rattlesnake is threatening a pet or person, the snake should be left to slither off, or be relocated, rather than destroyed.

The bite is not often fatal, but is very painful.

2.  Myth:  You should suck out the venom from the bite.

Sucking out the venom will not help.  One should not attempt to suck out the venom from a bite.  The venom can harm the person who is removing the venom if it enters through cuts or sores in the mouth.  As far as I know, the current advise is to just get to a hospital as quickly as is possible (and legal).  If you are a long distance from the hospital, wrapping the area of the bite with an ace bandage may help.  Do not use a tourniquet or tightly wrap the area.  Activity and panic will speed the action of the venom, so the bite victim should be as still and calm as possible (easier said than done, I would think, but that is the best course).  One may want to research and keep current of the proper treatment for the bites if they live in an area with rattlesnakes.

4.  Myth:  The rattlesnake stretch all the way across the road.

There are very many exaggerations on the size of prairie rattlesnakes and how far they can strike.  Prairie rattlesnakes rarely exceed four feet.  They can strike approximately one third to one half of the length of their body.  Most of the time, if you jump two feet away from the rattlesnake, you are out of harm's way.  (I realize there will be those who insist they have seen prairie rattlesnakes that stretch across the highway, were eight feet long, were HUGE, etc.  Having found no evidence or photos of this, I will go with my observations and those of herpetologists.)

While rattlesnakes have a very distinctive rattle, I will note that bull snakes can shake the ends of their tails against dry vegetation and produce a sound very similar to that of a rattlesnake.  Also, any time I have nearly stepped on a rattlesnake, I tend to jump at the sounds of grasshoppers, even though it is not that similar.  Not all rattling sounds mean there is a rattlesnake in the area, but it best to go with that possibility until you can verify otherwise.

Prairie rattlesnakes are an important part of the Wyoming ecosystem.  Hopefully, this look at the snakes and their behaviors will help convince people to adapt to the presence of the snakes. 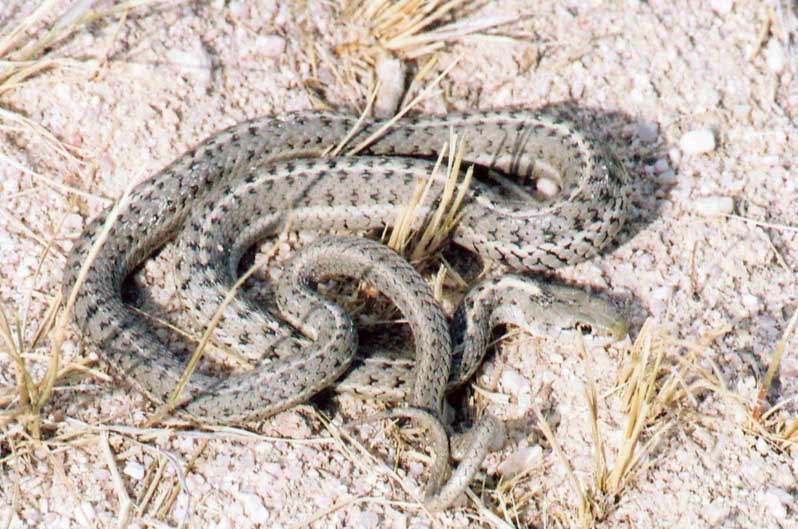 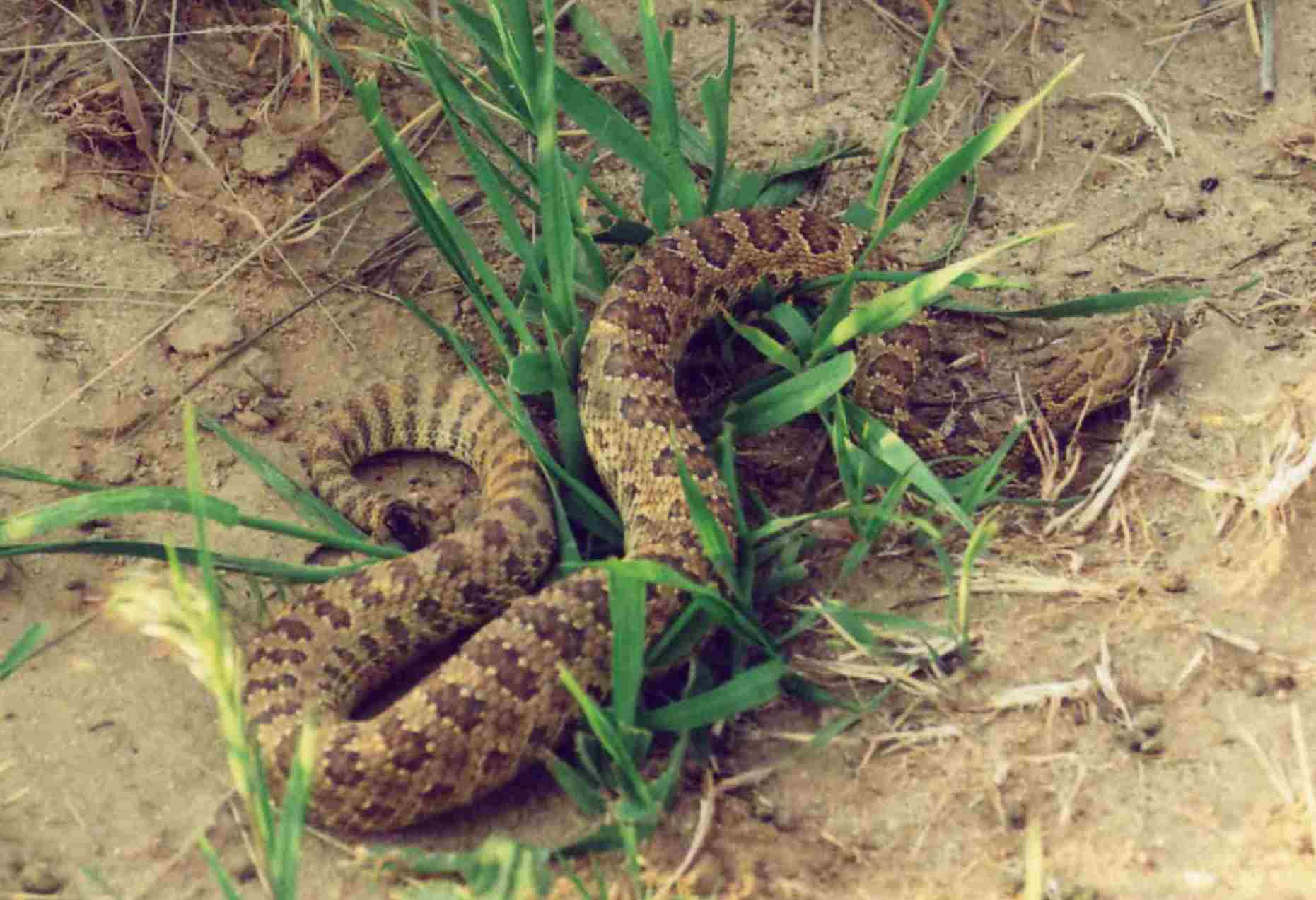 Proper method for relocating a rattlesnake
Bull snake
Garter snake
Hognose snake (I have no pictures of these snakes in the wild)
Rattlesnake that just fed.  This snake was also injured.  We relocated it because the people in the neighborhood were approaching it and an injured snake that just fed is about a dangerous as snakes go.
Archived pages
Home Page